This year marks the second year for KEDCO’s annual recognition programs, highlighting both individuals and businesses in the local community.

“In working to evolve our mission and economic development efforts, it has become clear that among the ‘well-kept secrets’ in Kosciusko County, many are people and businesses. This is a way to recognize these individuals and businesses, and share stories about the difference they’re making,” said KEDCO CEO Alan Tio. “We look forward to celebrating the awardees at the KEDCO annual meeting this fall.”

The Rising Leader award recognizes emerging leaders under the age of 40 who live or work in Kosciusko County, and are making a positive impact in the workplace as an employee, as a local business owner, and/or as leaders in the local community. Nominations should highlight at least one of the mentioned areas. The KEDCO team and board of directors will identify and award the Rising Leaders at KEDCO’s annual meeting in late October.

Additionally, KEDCO will again recognize Kosciusko County businesses that have made an investment in the community through new job creation, expansion projects, and/or by making a community-related investment during 2021, with Business Impact awards.

“A key part of our mission at KEDCO is to show the incredible things our people and businesses are doing to contribute to our communities and local economy,” said Tio, “We’re asking community members to share those successes with us.”

Nominations for both  2021 awards can be submitted online via KEDCO’s website: https://bit.ly/2021KEDCOAwards. The deadline for nominations is Monday, September 20, 2021.

To learn more about KEDCO and how the organization is making an impact here in Kosciusko County, visit www.kosciuskoedc.com. Connect with KEDCO on Facebook, Linkedin and Instagram @kosciuskoedc.

5 days ago by Katie Dewitt

1 week ago by Katie Dewitt

1 month ago by Katie Dewitt 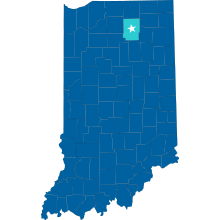